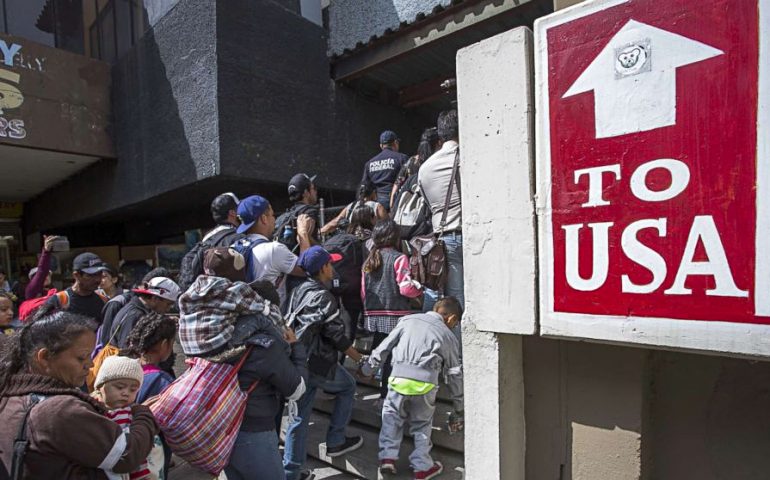 There are many immigrants along the United States Southern border who are currently held in detention camps and other immigration and Customs Enforcement facilities. There have been numerous developments regarding the treatment of immigrants that have ultimately been ignored by government officials.

There are people seeking and applying for asylum in the United States because they are fleeing persecution in their home countries. The coronavirus pandemic has been a contributing factor, but the increasing violence in countries such as Guatemala, Honduras, El Salvador and even parts of Mexico have been forcing people to the Southern border.

In the month of March, due to the pandemic, the Trump administration allowed people to gather at the southern border but denied them entry. There was a metering system instituted where people were required to wait their turn, and many times it was many months in order to have access to the entry port. If they did gain access to the port of entry, they would go through a slow process of applying for asylum with the hopes of getting a hearing. However, when the COVID pandemic became severe, the already slow process came to a standstill. This has resulted in many people being prohibited from entering asylum, disregarding status.

Currently, there are people still stuck in border towns which include Nogales and Tijuana and many other parts throughout the southern border of Texas, including Matamores and Ciudad Juarez. There are a couple hundred thousand migrants undergoing this very dire and unjust situation. The shelters for these migrants are inadequate and it has forced them to live on the street.

Of course, there are those who try to cross the border illegally. However, the issue is that many of the migrants who are arriving at the border have been presenting themselves legally. When caught, the Trump administration has been taking them into custody and has been withholding the opportunity for people to apply for asylum. Border patrol has been taking these migrants and putting them back across on the Mexican side. Again, they are being deported without court hearings. Even if one was entered without any kind of inspection, they would be detained but later would have an opportunity to apply for asylum. Now, those same people are being denied to chance of applying for asylum.

Instead, they are being immediately place right back across the border and it is a significant group of people undergoing this treatment. In a statement by Bill O Hing, Professor, Director of the Immigration and Deportation Defense Clinic and Dean’s Circle Scholar at the University of San Francisco, he said, “Any new person trying to immigrate lawfully to the United States, with rare exception, and only under extraordinary circumstances can they come to the United States. COVID has given the Trump administration cover for essentially stopping new immigrants.”

Furthermore, there is another group of immigrants who made it to America but were placed into detention facilities and all of which occurred prior to the pandemic. For these people, the number of immigrants has been shrinking and there is now approximately 20,000-30,000 people that are found in immigration detention locations around the country. It has decreased from 50,000 who were previously in the detention facilities. One of the main reasons why this number has decreased is because some of the immigrants have simply given up and have asked to be deported. Some of the individuals who had either contracted the virus or were in the detention facility where there was small scale epidemic, have been released. However, there are still family detention facilities in two cities of Texas that are carrying on with normal operations, which are Karnes and Dilley.

Those facilities mostly house women and children and they currently include a few hundred immigrants. There was a time when the detention facilities had thousands of people within the center. They would at times have their hearings within the detention center, especially for the centers without families. The immigrants almost always represent themselves due to their not being enough volunteer attorneys. For this reason, they frequently lose their hearings. There are, however, attorneys working to help those who have lost their hearings by writing briefs for them to the Board of Immigration Appeals, which is the immigration administrative appellate organization.

On the other hand, there are many immigration detention centers that consist of almost all males. The largest ones are located in Arizona and in Southern California, Louisiana, and Georgia. The asylum hearings and deportation hearings have been continuing on for those in detention. For the immigrants who have been released from the detention centers, the immigration courts have been shut down for the time being. Some cases that deal with non-detained cases have reopened in locations such as Boston and Las Vegas. Although, San Francisco has not reopened for those with non-detained cases and also other locations throughout the country.

Many have questioned what the Trump administration’s plan with Mexico is regarding the work to keep the migrants from leaving? Mainly because the Mexican army had sent troops down to the Southern border to keep migrants from coming into their country and traveling up north. The reason is because President Andres Manuel Lopez Obrador of Mexico had been elected two years ago and took up office with an agenda of resisting the anti-immigrant intentions of the Trump administration. But immediately, President Trump began hard negotiations with President Andres. Ultimately, President Trump finalized the issue to the renegotiation of the United States-Mexico-Canada Agreement (USMCA). Part of President Trumps message in these efforts was that if they did not start enforcing a southern border and also detaining migrants before they reach the border, then President Trump would refuse to sign the agreement.

Mexico has allowed asylum to many of those seeking it but there are many countries, such as Venezuela, where it is too difficult to get through Mexico. With President Elect, Joe Biden, the immigrants facing this persecution of not receiving asylum, has a stronger chance of reform.