Myanmar votes for a better future 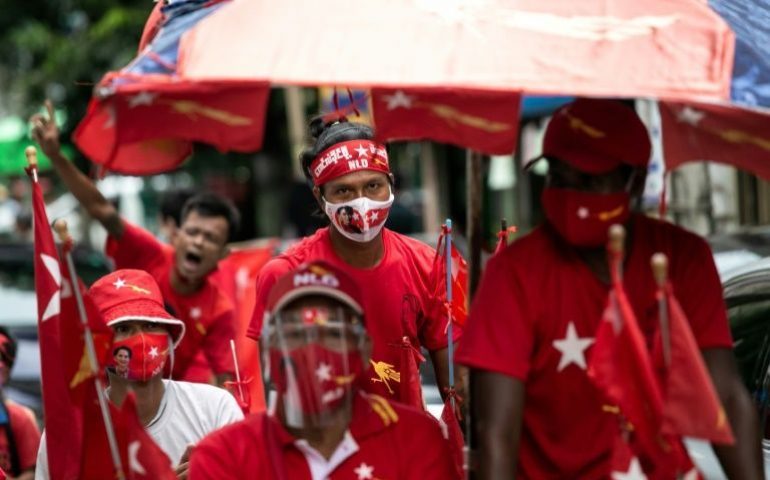 Myanmar held its general elections on November 8, with over 37 million hopeful citizens, casting their votes.

Aung San Suu Kyi’s local fame will most likely bring her to another five-year term in its second democratic election, regardless of allegations of genocide as she protected the army atrocities done to Rohingya Muslims. Support for her among the ethnic minority groups has disappeared after she promised to end decades-long civil wars and failed to do so.

Along with her three children, Maria Ja Taung, an ethnic Kachin run away, cast her vote in hopes to create a good government and end wars. She said, “I’m excited to vote as I believe each citizen’s vote is crucial to ensure a good government.”

She also told the UCA News, “Despite setbacks and challenges under Aung San Suu Kyi’s government, I still hope to see peace in the post-election era,” her vote went to the Kachin party for the regional parliament and Suu Kyi’s National League for Democracy (NLD) party for the lower and upper houses. A young IDP in Kachin state don’t have much hope, Awng Ja told the human rights activist Stella Naw “Our future is very uncertain. The political reform and peace process are moving backward not forward.”

Several IDPs sensed that they were being left behind by the NLD who promoted inclusivity and a vision for federalism but turned to focus the majority’s interest. The November 8 general election is just another state vehicle to finish the already vulnerable minority community further to the brink, this is what people like Aung Ja believes in.

More than 100,000 people from the Kachin and northern Shan state are being forced into 167 IDP camps because of the ongoing trouble between the ethnic militia groups and the Burmese army since 2011. Ethnic Kachin citizens are mostly Christians, opposite to Myanmar’s Buddhist belief.

Since the country gained its independence from Britain in 1948, fighting has afflicted its mountainous northern regions. The majority of Kachin’s 1.7 million population are Christians, including 116,000 Catholics. Peace stayed elusive and it is a long way for her to go back to her place of origin due to the insecure situation, Ja Taung realized.

Minority ethnic groups make up a third of the country’s population of 54 million people. The majority of the Christian populations can be found in the states of Kachin, Chin, Karen, and Kayah. Many of its people believe that things in their government have not improved in the past five years as the fighting continues, punishing the ethnic regions.

Naung Latt told UCA News “Many people including ethnic groups had high expectations of the government led by Suu Kyi after the 2015 election, but people have lost hope in her performance,” he said Suu Kyi’s NLD party is not as famous in the area as the Shan and Ta’ang ethnic parties. The Union Election Commission reported that elections are not happening in 192 village tracks in 11 of 18 townships in Kachin state including every area under KIA control, together with Rakhine, Shan, and Bago areas. Around 38,000 IDPs from KIA-controlled regions will not be able to cast their votes.

According to the US-based Carter Center, around 1.4 million voters will be disenfranchised including the majority of the voters in Rakhine state, which will observe the election. The injustice of minority groups goes back seven decades, underpinning just why the country’s ethnic groups see such a tough road ahead despite a concerted effort by the NLD-led government. Leading the country to independence from Britain, Suu Kyi’s father, General Aung San, reached an agreement regarding self-autonomy and federalism with the Kachin, Shan, and Chin ethnic groups in 1947 but failed to secure other ethnic groups.

Soon afterward, the deal was never fulfilled, Aung San was assassinated. Ethnic groups took up arms against the central government. Ethnic people from the country’s seven states have called for what Aung San agreed, a system based on federalism and autonomy. The rights of minority groups were abandoned during the decades-long rule of the Bamar majority’s iron-fist military.