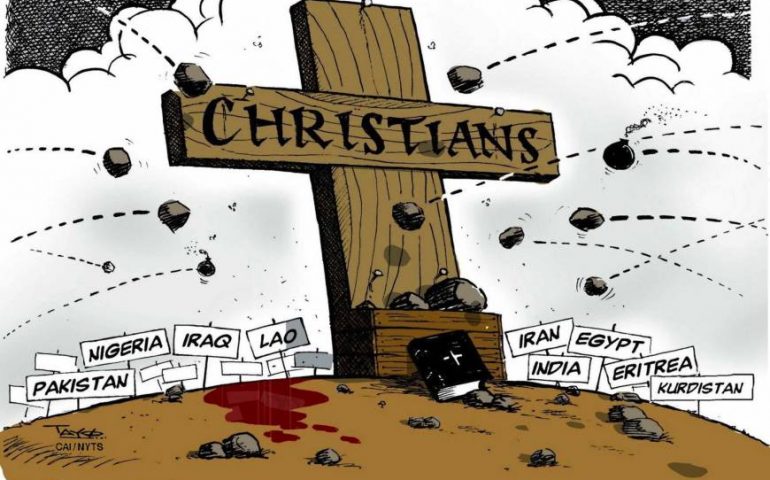 A controversial finding was verified by the Pew Research Center’s 11th annual study that observes the limitations on freedom of religion in 198 nations. The finding led to one belief, dictators are the worst persecutors of believers.

The level of government violations has reached an all-time high in 2018, with 56 nations suffering “high” or “very high level” of official restriction. And despite dropping slightly to 53%, it is still an alarming number for nations to suffer “high” or “very high” levels of social hostilities. Altogether, 40% of the world experiences notable obstacles in worshipping God and the movement continue to be negative.

When Pew started its innovative survey in 2007, the median level of government restrictions had increased by 65%, double that for social hostilities.

The International Day of Prayer (IDOP) was launched by the World Evangelical Alliance (WEA) back in 1996, held every year during the first two Sundays in November. This year, the campaign was called “One With Them” with the “Them” pertaining to the 260 million Christians around the world who face punishment with 8 Christian crucified every day for their faith. But that’s not all of it. In the 178 countries that require religious groups to register, almost 40% apply it with bias, Ahmed Shaheed a UN special reporter for freedom of religion and belief said.

“The failure to eliminate discrimination, combined with political marginalization and nationalist attacks on identities, can propel trajectories of violence and even atrocity crimes,” he said.

Shaheed told CT in an interview in April that “Faith has to be voluntary. There is no value in faith if it is not free.”

Among the world’s 25 biggest nations, India, Egypt, Indonesia, Pakistan, and Russia had the highest total levels of both government restrictions and social hostilities.

Pew noted that authoritarian governments lead the way, but not all of them are autocracies. 65% are authoritarian of the 26 nations ranked as ‘very high’ in government restrictions. Of the 30 nations placed as ‘high’, 40% are authoritarian, while 37% are a mixture of the regime and some democratic tendencies.  After banning the Muslim face veil, Denmark was the only full democracy.

Four are authoritarian, three are hybrid, and three are flawed democracies – India, Israel, and Sri Lanka, of the 10 nations ranked as ‘very high’. The 43 nations ranked as ‘high’ 21% are authoritarian, 14% are mixed, 30% are flawed, and 12% are full democracies. Germany, Switzerland, and the United Kingdom are included. Eritrea and Kazakhstan were some authoritarian states with high restrictions on religion that have successful tampering in social hostilities. Recorded as average social hostilities are nations like China, Iran, and Uzbekistan. Pew researchers state that “High levels of government control over religion may lead to fewer hostilities by nongovernment actors.”

The Middle East and North Africa (MENA) ranked as the highest median in terms of government restrictions. 18 of the 20 nations ranked as “high” or “very high.” Shaheed reported that 4 among 12 nations criminalize apostasy with the death penalty. Among all the Middle East nations, it was Iraq and Syria that have their churches shrunk in size over the past decade. After the MENA, the region of Asia-Pacific is the second-highest in terms of government restrictions.

On a 10 point scale, China 9.3 and Iran 8.5 led the region, recording new highs were Tajikistan, India, and Thailand. Shaheed focuses on Thailand’s surveillance of Muslim groups, similar to Vietnam. Social hostilities go downward in its newest survey, a Pew reporter noted. MENA was leading 55% of its nations suffering ‘high’ or ‘very high’ social hostilities, according to the government rankings. Europe was second having 36%, and Asia-Pacific was third having 28%.

America ranked the lowest in both categories. Iraq, Western Sahara, and Yemen were the three nations added to the ‘very high’ government restrictions. Comoros, Laos, Pakistan, and Sudan were removed, though all stayed ‘high’.

Meanwhile, Christianity and Islam remain the most harassed religion worldwide. Jews are harassed in 88 countries, Buddhist suffered the highest rise in global harassment from 17 countries. Proper religious freedom advocacy needs to represent every belief, Shaheed stated. He praised the WEA for being ‘very inclusive’.

“Human rights work is like dropping water on stone, given enough time, it will eventually break down,” he told CT.