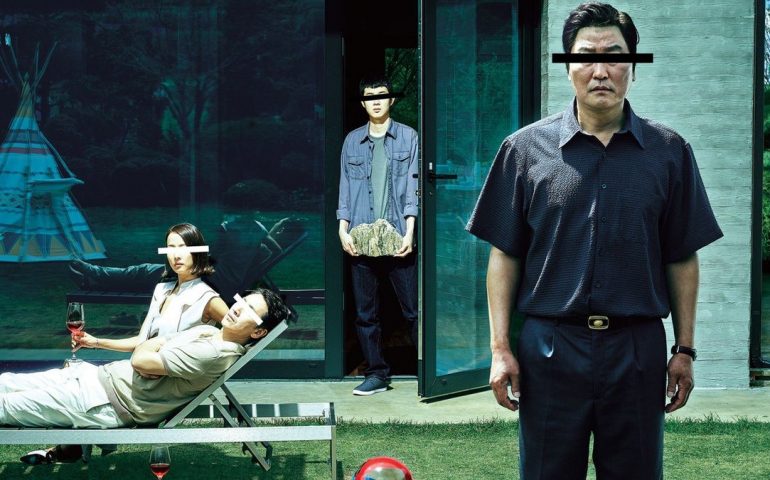 In 2019, Parasite was the first international film to win an Oscar for Best Picture. It’s a story about two families on the opposite sides of the wealth spectrum, and speaks to their clashes in lifestyle and values. It’s also a social critique of South Korea’s systemic inequality.

There’s plenty of humor, such as the son squatting near the toilet to get better wifi. There’s also the beautiful cinematography, where Parasite serves as a masterclass in using visual features like stairs and lines to reinforce class themes.

In one particular shot, the Kim family escapes a close call at the wealthy Park residence. They make their escape in the middle of the night, running downhill across the city back home. From the heights of the wealthy Park home, they travel down stairs, through tunnels, and ultimately have to wade through waist-high water to get to their low-income, basement-level home. They return home to find everything flooded, and it’s punctuated by the toilet bursting open with sewage.

The next scene shows the Kim family sleeping on a mat alongside thousands of other displaced families in a public facility. In this moment, the class difference could not be more apparent. The wealthy Park family rejoicing at the rain that waters their perfectly trimmed grass. Contrast that to the rain that destroyed everything the Kim family owned, leaving them to sleep at the gym.

The long trek downhill to their destroyed home can represent the widening class divide in many developed countries, but especially Korea. The current state of inequality and the widespread unemployment in South Koreans has become a big problem. In fact, citizens have created a term for it: “Hell Joseon,” or “Hell Korea.”

What is Hell Korea?

Younger Korean coined the term “Hell Korea” to criticize the socio-economic situation in Korea. They complain about government policies that contribute to youth unemployment, economic inequality, and the inability to rise out of poverty despite long work days and hard work.

The final scene of Parasite highlights this in a depressing fashion. The son desires to reunite with his father, who’s now trapped in a basement and cannot leave, lest he get arrested and imprisoned. The son hatches a plan: work really hard, make a lot of money, and purchase the house so his father can be freed from the underground dungeon.

But just as soon as the viewer soaks in the happy ending, they are brought back to reality. It was all a dream. The son is still living in poverty, and financially there is zero chance of seeing his father again. In fact, director Bong Joon Ho did the math: given the son’s likely earning capacity, it would take him 564 years to earn enough to purchase the house.

Class inequality is a big issue. But it’s just one of several ways where inequality rears its ugly head. Where else do we see this?

The Issues of Inequality

For how modern and progressive Korea is, it’s still dealing with a number of inequality issues and human rights concerns. Besides social class and the wealth gap, two big issues come to mind: religious persecution and sex trafficking.

The Republic of South Korea has shined internationally in its response to the coronavirus outbreak. They have received a lot of praise, and for good reason; but what hasn’t been covered nearly enough is how that response raised human rights concerns and violated religious freedom values the Korean government upholds.

The event that put South Korea on the map was an outbreak in the city of Daegu. Though the first case had appeared on January 20th, the government was reluctant to close its borders to China at the time. Korea did eventually take the outbreak seriously, but not for many weeks.

As a result, the virus continued to make its way around, infecting a member of the Shincheonji church, where the virus spread in mid-February to over 4000 other congregants. Immediately, the government aggressively traced and tested over 200,000 members.

Since that time, the group has stopped all gatherings, and the 4000+ members who recovered from the virus offered to donate plasma to support vaccine and therapeutics research.

Yet the organization has been cast as a villain by the press and other religious organizations, and the government has joined the fray. The church’s leaders are being charged for crimes, and members have lost their jobs and received abuse within their families, with a woman even jumping to her death.

The Korean Government has the power to unite instead of divide, and to support the marginalized. To date, they are still investigating the church, but they still have the opportunity to bring people together to fight the real enemy, the coronavirus.

As the coronavirus dominated the major South Korean news headlines for the last 3 months, another disturbing development sent shockwaves throughout Korea. Revelations about a widespread Sex Trafficking Ring – known as the Nth Room – were made known in March as police cracked down and arrested one of the operators of the chatrooms.

To be clear, the government did not commit these crimes. The government has pushed aggressively to prosecute the case, but many can argue that it is too little and too late. The sex trafficking ring became prominent partially due to the lax attitude the Korean government had on sex trafficking in the past. The Ministry of Justice characterized their previous efforts as ‘lukewarm.’

The public has lost confidence in Korea’s ability to crack down. Currently, there is a petition to reveal the identities of all of the operators and participants. One reason these petitions now have millions of signatures is that the community seeks justice that the government may or may not provide.

A Call to Fix Inequality

Korea has developed a reputation for becoming a strong economy, having strong social order, and a beautiful culture. They should be praised for elements of their coronavirus response.

Yet movies like Parasite and recent revelations around discriminatory practices and sexual assault allegations have shown us how there’s still a long way to go. But with the spirit of the Korean people to work together as we’ve seen these last few months, they have a promising future of reforming and addressing the inequalities to make a more equitable Korea.

A History of Oppression: Who are the Most Oppressed Groups of All?

PrevPrevHow Religious Minorities are Coerced in South Korea
NextWhat is Discrimination and Prejudice?Next