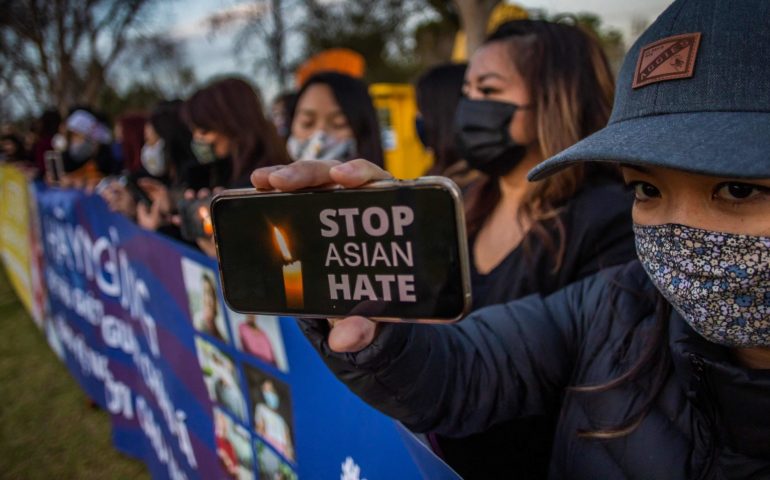 These were the names of the eight people who were killed in connected mass shootings at three massage businesses in Atlanta, Georgia last March 16. Six of them were Chinese and Korean American women.

The news of these killings has brought upon fear and anger amongst Asian American communities, wondering if they’re going to be the next victims just because a white man was having ‘a bad day’.

Today, it’s six but what about tomorrow or the next day?

And just a little over a week after the horrifying racist incident, a 65-year-old Asian woman was brutally beaten along 43rd street in New York City. A man came up to her while she was walking, kicked her in the stomach then stomped on her face several times while she was knocked on the ground. All the while, the man hurled anti-Asian statements at her.

He casually walked away and witnesses stood by.

Today, another Asian was added to the growing list of victims of racially-motivated crimes. What about tomorrow or the next day?

The murder of the 6 Asian American women grabbed many international headlines and took social media platforms – Facebook, Twitter, Instagram, and YouTube – by storm. It became a topic of online discourse regarding the racism that many Asian-Americans face on a daily basis. And it brought to the surface many eye-opening conversations especially the question as to how people who seemingly enjoy Asian culture remain silent with everything that has been happening.

The Atlanta shootings were not isolated incidents of anti-Asian hate or exceptional. According to Courtney Sato, a postdoctoral fellow in The Charles Warren Center for Studies in American History, this “brutal bigotry against Asian Americans” has long been part of the history of the US.

She said, “The important thing to remember is that this is really not an exceptional moment by any means. But it’s really part of a much longer genealogy of anti-Asian violence that reaches as far back as the 19th century.”

And there is seemingly an “intersectional dynamic” between being an Asian and a woman that puts them into a more dangerous position. In a research released by STOP AAPI Hate, a reporting forum, there were nearly 3,800 anti-Asian hate incidents from March 19, 2020 to February 28, 2021. There has been a substantial increase from the 2,600 hate incidents recorded last year within five months. Roughly 500 incidents happened in the first 3 months of 2021 alone. And what was more alarming was that 68 percent of the reports were made by women compared to the 29 percent of men.

These numbers don’t even reflect the incidents reported to the police.

Angie Chang, Associate Professor of Journalism in the University of Colorado Boulder, recently published an article on The Conversation. There she tackled the two dangerous stereotypes among Asian Americans perpetuated by the media that she described diminished the humanity of the victims of the Atlanta shooting.

The model minority myth perpetuates the stereotypes of Asian American children as academically-gifted pushed by Tiger Moms to work harder and excel. Aside from that, it also classifies nerdy and effeminate dads holding positions in industries like medicine and accounting but are not given any leadership roles. Most of all, it characterizes Asian Americans as individuals capable of achieving higher levels of success than the others with a combination of talent and grit.

Alongside the model minority myth operates another stereotype of Asian Americans as perpetual foreigners. In here, the message is clear that all Asians are the same, often along the lines of “I couldn’t tell them apart.” But they are different from other Americans. It’s like a paradox. At one point, they point to Asian Americans as the most assimilated into American culture compared to other minority groups yet they are still viewed with a foreign quality that separates them and makes them perpetua outsiders.

What are the dangers of these stereotypes?

First, these ignore the diversity of the cultures of Asian Americans. One of the most common illustrations of this is pay disparities. Many who still stick to the stereotypes often argue that Asians are the most highly-paid individuals in the US. they even go as far as quote Crazy Rich Asians to make their point.

But according to Chang, that ‘data’ masks the fact that among racial groups, Asian Americans have the highest income inequality. That is, the top 10% population basically earns 10 times more than the bottom 10%.

Second, these erase the fact that Asian Americans experience racism. According to Learning for Justice, stereotypes ignore the Chinese Exclusion Act of 1882 and the 1940s Japanese internment. It sets up the US as a place where Asians are welcome even though anti-Asian violence has long started back in the 19th century.

Not to mention that Asian Americans are also pushed into a pedestal allegedly benefitting from an elevated status given to people of color. Despite the fact of centuries-long of systematic discrimination and oppression.

What We Can Do

Anti-Asian hate should not just be a thread of conversations on Twitter or shared stories on Instagram. And the recent violence emphasized the need for collective action. A systematic problem cannot be resolved within the walls of digital media.

So what can you or I do?

Educate ourselves and raise awareness

With the power of the Internet and Google to answer all our questions, everything has become easier. Read news articles and when there’s something you encounter that isn’t familiar with you, Google it and find out. Know about the history of Asian Americans, explore their diverse cultures. It can also be just as easy as taking the time to learn how their names are pronounced as a form of respect.

As you raise your own awareness about these things, you will be able to better help others to understand the plight of Asian Americans in the US.

If you have a platform, use it to share resources and to speak out about what is happening. Many are still aware that these things do not happen because they are surrounded by a bubble of privilege. Poke that and make them uncomfortable with their silence. Now is not the time to be silent.

This might not look much but these funds can go a long way in helping out Asian American communities especially now that many businesses suffered from the effects of the COVID-19 pandemic. It will help give out warm meals to those severely affected and facing dangerous situations in light of the increasing anti-Asian violence.

You can also support Asian-owned businesses by purchasing their products and services. That way, you help their businesses keep afloat. There are a lot of resources that can point you in that direction.

The anti-Asian hate violence is not going to stop anytime soon. And it may even be expected that these violent acts will accelerate if we don’t stop it now. Asian Americans in the US are facing fear every time they wake up, it creeps up to their shoulders when they go out of their homes.

It’s happening. Make noise and demand for the dismantling of the system that perpetuates this discrimination and oppression.

PrevPrevCountries where Christians are persecuted today