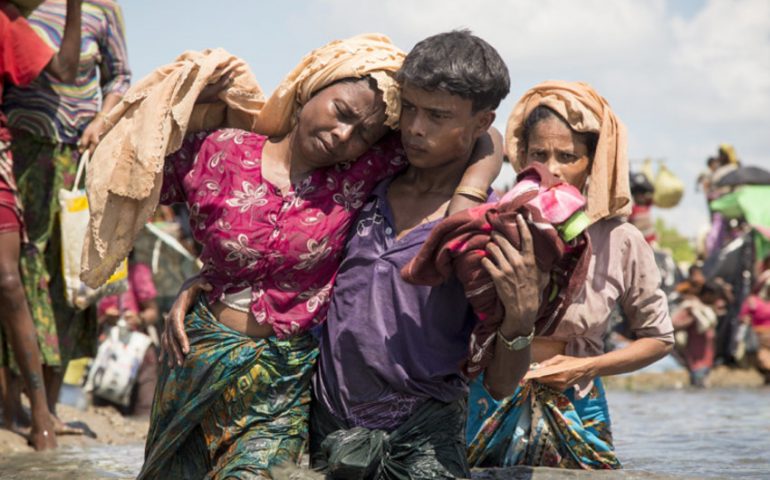 Many ethnic and religious minority groups face persecution and discrimination from the reigning majority. This has been a social-political phenomenon for centuries. Because of this, minority groups are often the targets of violence and humanitarian crises; these groups are murdered through acts of genocide, sexually assaulted, tortured, and driven out of lands they once called home.

Some of the worst humanitarian crises are currently taking place in Southeast Asia; the Rohingya refugee crisis is one of the most severe refugee crises of the modern era. Many humanitarian nonprofits and organizations around the world have voiced their concern over such a tragedy. The United Nations has dubbed them as “the most persecuted minority in the world,” and the chief of the UN has stated it is a “‘textbook example of ethnic cleansing,’” (National Geographic, UNICEF).

According to OCHA, nearly 750,000 Rohingya have migrated out of Myanmar. Four years ago, Rohingya villages were destroyed and many Rohingya people were either murdered or raped by the hands of the Myanmar people, driving them to the outskirts of Bangladesh where they currently reside (OCHA). Unfortunately, however, the Rohingya people are no stranger to persecution and discrimination; the Rohingya refugee crisis has been a brewing predicament, leading to hundreds of Rohingyans migrating to areas within Bangladesh in previous years (World Vision).

Now, with the most recent influx of Rohingya refugees, there are approximately 900,000 Rohingya refugees “[living] in the world’s largest and most densely populated refugee camp,” (World Vision). On their website, the United Nations has a video of a flyover of what the Rohingya refugee camp looks like – thousands of makeshift tents covered in mud, closely knit together in clumps and spread across the empty land in Bangladesh. This is clearly a human rights emergency.

Who are the Rohingya people why did they become refugees?

According to National Geographic, they are a Muslim ethnic minority who resided in Myanmar (once known as Burma), a country that primarily practices Buddhism. The Rohingya have inhabited areas of Myanmar for hundreds of years – since the 13th century – but because of their exclusion, discrimination, and persecution, have never truly had a state of their own. The conflicts between the Myanmar people and the Rohingya people originated from Britain’s colonization of the area in the 1800s (National Geographic).

Bitter because Rohingya workers took away from Myanmar workers, the Myanmar people took out their anger on the Rohingya people (National Geographic). Now, the Myanmar government doesn’t recognize the Rohingya people’s history in their country’s land and does not even “recognize them as people” (National Geographic, BBC). They’re “denied citizenship” and “had very limited access to health care” in Myanmar (Doctors Without Borders). On top of this, the areas in Bangladesh where the Rohingya have fled are not the safest or most ideal either.

Wet monsoon seasons threaten the Rohingyas’ already brittle infrastructure (UNHCR). During one monsoon season, UNICEF reported that landslides destroyed many people’s homes, and “water and sanitation facilities were damaged, increasing the risk of waterborne diseases.” Because of this crisis, there are many dangers the Rohingya people are vulnerable to, especially with the current spread of COVID-19. Doctors Without Borders reports that since the Rohingya people were left out of receiving routine care in Myanmar, they could not receive the proper vaccinations needed to prevent many diseases. So now that they are in such a vulnerable, mistreated state, many outdated diseases, like diphtheria, “re-emerged,” (Doctors Without Borders).

The catalyst for this most recent refugee crisis began when a group of Rohingya people set up an attack against Myanmar police (BBC). Outraging the Myanmar people, who were already distraught with the presence of Rohingya people in their country, both police and civilians drove out the Rohingya people with violence (BBC). The total death count ranges around 6,700 Rohingyan people, while the Myanmar government alleges the death toll is only 400 people (BBC). Along with this, the Myanmar government states that after September 5th, there was no longer any violence carried out against the Rohingya people, but “BBC correspondents have seen evidence [that the violence] continued after that date,” (BBC).

Not only were people murdered and raped, but the Myanmar people set villages on fire, leaving them completely ruined (BBC). Shortly following these events, the Myanmar government came under the investigation of the United Nations, the International Court of Justice, and the International Criminal Court, who considered these acts of violence as genocide (BBC). However, in response to these allegations, Myanmar stated they would launch their investigation into the matter, which “raised questions” among outside investigators (BBC).

But, as seen throughout this article, many have come to help the Rohingya people. Doctors Without Borders conducted “1.3 million medical consultations from August 2017 to June 2019.” The International Court of Justice called for the Myanmar government “to take emergency measures to protect the Rohingya from being persecuted and killed,” (BBC). The United Nations’ Refugee Agency delivered much-needed supplies to the people as they fled from Myanmar, and are working with other organizations for the construction of roads, wells, and “sanitation facilities.” UNICEF brought “education services for nearly 220,000 children.”

Unfortunately, this does not mean justice has been delivered or the problem has been solved. It has been nearly four years since the crisis began;  there are still many dangers the Rohingya people face with minimal access to basic needs such as food, water, and sanitization. What the Myanmar people committed against the Rohingya people are human rights violations, and must be dealt with accordingly. Thankfully, many of these humanitarian organizations cited within this article have links to resources in which even we, who may be thousands of miles away, can still help the Rohingya people.